Olympic day 15: Bring your A Game

11 Aug 2012 Saturday
Day 15 of the London Olympics was the scene of several impressive events, where the athletes had to bring their best or be blown out. Some athletes stepped up, dug deep, and gave it all they had, doing their very best in the fight for gold. Others, came less prepared and were knocked out in the last fight.

In one of the most stunning upsets of the day, what a huge and glorious win for Mexico, the 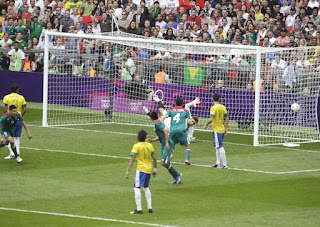 underdog team going into the final, who gave it their all to beat out heavily favored Brazil and take the gold in Men's Soccer! Oh, what an upset! What a stunning display of teamwork, hard work, and skill from the Mexican players who fought hard to get that gold, winning 2-1. And what a disappointing performance from Brazil, who were scattered, fighting among themselves, and did not come with their A game. It was like Brazil came unprepared, arrogant, and expected an easy win, and as a result of shoddy play and poor defense, they got their asses kicked by the better organized, faster, more talented Mexican team. There was no doubt about this win. Mexico was the better team, so much better compared to Brazil. And what an amazing Olympic performance from Mexico, who wins their first ever gold medal in the soccer. Viva la Mexico!

In track, the US women win its fifth successive Olympic gold in the 4x400m relay. The American team of Deedee Trotter, Allyson Felix, Francena McCorory and Sanya Richards-Ross would takes off at a rocket pace, crossing finish line 3 seconds ahead of silver medallists Russia. Jamaica would barely beat off Ukraine for the bronze. It was another spectacular race by a strong US team.

Over in the men's 4x100m relay, the Jamaican team of Nesta Carter, Michael Frater, Yohan Blake, and Usain Bolt win the gold and set a new world record time of 36.84 seconds. The US takes silver, and heartbreak for team Canada, who original came in third place, but was then disqualified for stepping outside the line. This opened the door for Trinidad asnd Tobago to get bumped up to bronze.

In the 5000m race, Mo Farah wins gold, giving Britain its second long distance gold medal in their Olympics history-Farah having won the first in the 10000m race earlier in the games. Ethiopia's Dejen Gebremeskel catches silver, and Kenya's Thomas Longosiwa, the bronze.

Meanwhile in women's volleyball, Brazil comes back from a huge loss in the first set to successfully defend their Beijing title, winning gold. The currently ranked number one US settles for silver once more. And Japan gets bronze.

My other favorite sport of the Olympics is Rhythmic Gymnastics, which is the most beautiful and dazzling of all the gymnastics events. It is the sport of very flexible, bouncing gymnasts who compete by twirling batons and ribbons and dancing with hula hoops, balls, and clubs. Why is there not a professional league for rhythmic gymnasts? If there was a league, I'd watch every game! 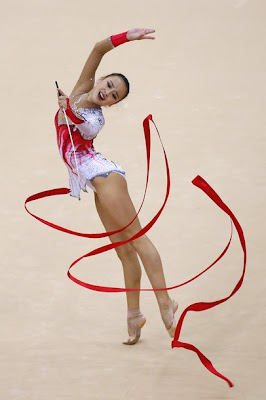 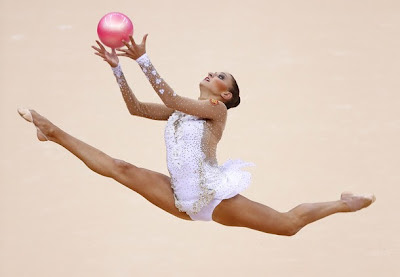 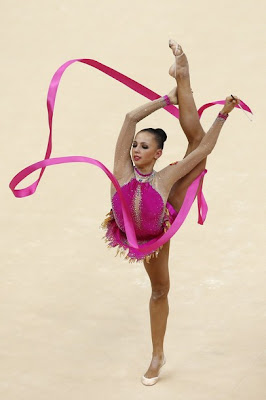 In the individual all around event, world champion Evgeniya Kanaeva of Russia makes history, successfully defending her Beijing title and becoming the first woman to win gold in two back to back Olympics. She put in a graceful, accurate, sparkling performance and dances her way to gold. Daria Dmitrieva of Russia bounces her way to silver. And Liubou Charkashnya of Belarus twirls her way to bronze. 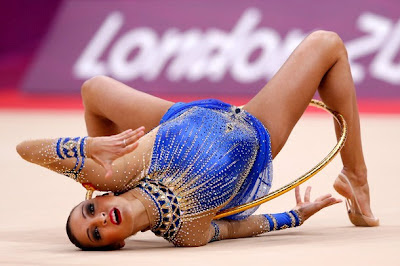 Finally, I have to give props the most amazing performances I've ever seen these Olympics from the extraordinary divers in the Men's 10m Platform Dive. Every diver in the final gave their best! This was the gold medal that China was denied in Beijing 2008, and they come in heavily favored to take the top spot with world champion Qiu Bo. Defending Beijing champion, Matthew Mitcham, plagued by injuries and still recovering, put in a good performance, given he wasn't in top condition. He did not make the final cut, but he put in a great effort. American diver David Boudia, world silver medalist from last year, and British diver Tom Daley, 2009 world champion, barely scraped through in yesterday's preliminaries. But they came into the finals in top form, putting pressure on the Chinese divers. 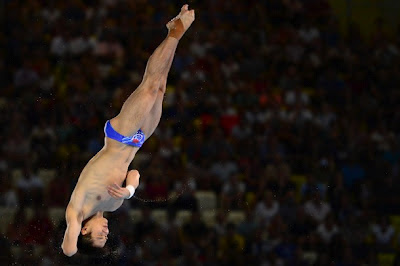 Qui Bo is the first diver to ever score above 600 points in competition in 2011. He was also leading points during the 2009 world championship, but the pressure got to him and he made mistakes, allowing Tom Daley of Britain to take first place and be world champion. Going into the final dives, Tom Daley and David Boudia worked together to put pressure on the Chinese divers, knowing that the Chinese often start to collapse under pressure. Tom Daley started the first round with a bad dive, due to flash photography interference from the overly excited crowd. He was allowed to re-dive, and he earned a great score.

By the time the last two rounds came about, the plan to pressure on the Chinese was working. Going into the last round, Tom Daley had pulled into first place, with David Boudia a close second, and the nearest Chinese diver, Qui Bo in third. Tom Daley had jumped first to win first place; but his lead was not guaranteed, because his difficulty score was lower than the Boudia's and Qui Bo's last dives. Boudia went next and executed a near perfect dive, earning him the lead. He was now guaranteed a medal. But with Qui Bo going last, the color of the medals weren't set yet. Qui Bo dives, and it was good, but not enough to take the lead. And for the first time since Laura Wilkinson won women's 10m platform in Sydney 2000, an American has won gold in diving! 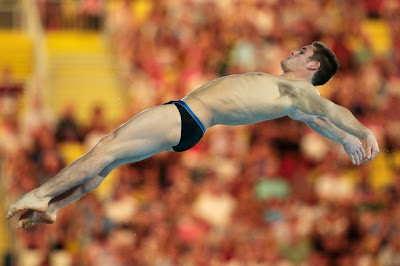 David Boudia takes gold! The last time an American male won in the 10m platform was back in Seoul 1988 with Greg Louganis, 24 years ago; the last time an American male won gold in any Olympic diving event was 1992 Barcelona, when Mark Lenzi won the 3m springboard event, 20 years ago! Boudia has all ready won bronze earlier in the 10m synchronized event with his partner Nicholas McCrory. It is amazing achievement for Boudai, who dived the best ever in his career. Qui Bo would cry at getting silver, as once again, the Chinese fail to win gold in the event, just like Beijing 2008.

But it is host nation favorite, Tom Daley, who is the happiest with taking the bronze to the cheers of a home crowd. It was not easy to compete under such pressure. He made his debut at Beijing 2008 at 14 years old, the second youngest British athlete ever to compete at the Olympics. Ever since then, he had to live under enormous public scrutiny as the media and public hounded his every move, documenting his life.

He has endured the media pressure and vicious attacks from jealous and mean spirited idiots. As a young teenager, he faced threats and had objects thrown at him by jealous and hateful people who resented his growing fame and star status. He had to change schools for his safety and in order for him to continue his education and concentrate on improving his diving skills. Tom Daley overcome unbelievable challenges to get here in the finals. He lost his father to cancer last year. And when he and his partner missed the 10m synchronized platform dive podium, he was subjected to vicious Twitter attacks, where ignorant, idiotic trolls said that Daley had let his father down-a hateful attack meant to hurt Daley, as his father died just a year ago in May after a long battle with cancer. Luckily, the more enlightened members of the British public came to Tom's defense and the culprit who was sending these hate messages was caught and arrested.

Tom Daley came to these games determined win a medal, not just for Great Britain, but for his dad. And the look of pure joy on his face and the faces of his celebrating teammates showed that he achieved a great feat, getting Britain its only diving medal of the games. He dedicated his enormous and hard won bronze to his father, his family, and his supporters and the British public. To celebrate his bronze victory, the British diving team carried Tom Daley and they all jumped into the pool. Now that's the way to celebrate a win! 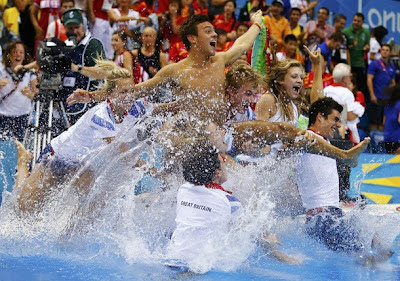