Aug 2012 Wednesday
History was made on day 12 of the London Olympics, as several athletes in the battle for gold, prove themselves to be titans among mortals.

It is a three-peat for Americans Misty May-Treanor and Kerri Walsh-Jennings who win their 3rd consecutive Olympic beach volleyball gold. When they won in Athens in 2004, they weren't 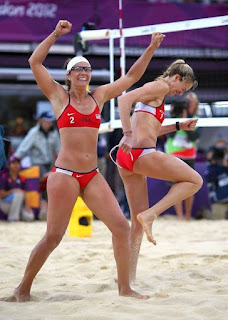 really aware of what they had accomplished; they were young, having fun, and just excited to be a part of the Olympics. In Beijing 2008, older and wiser, they overcame a much tougher field to successfully defend their title. They retired after Beijing to start their families, having children and settling down. But a few years later, with the kids just a little bit older, they decided, over lunch, to put the team back together and try one more time. They come back from injuries and play catch up to the higher ranked teams and arrive in London in top form. They performed beautifully and won every match against the other strong teams. And by winning this 3rd Olympics gold, they become legends.

No other team has shown the same trust, respect, and communication that Misty May-Treanor and Kerri Walsh-Jennings have. And no other team has shown as much passion and joy in what they do the same way this iconic team has. They have elevated the sport of beach volleyball and made it globally popular. They leave the London Olympics as the greatest beach volleyball team ever! They leave as legends.

The news in Men's Indoor Volleyball is not so good for the US. The defending Beijing American team was knocked out of medal contention by a stronger Italian team in sweep of 3 straight sets. The majority of this American team is made up of new, young, inexperienced players with a few veterans from the champion team left. But it's a good learning experience. And Italy will go to the semifinals to face Beijing silver medalists Brazil. Russia sweeps Poland and will advance to the semifinals to face Bulgaria.

Over in Women's 63kg Freestyle Wrestling, Japan's Kaori Icho becomes the first woman (and second person ever) to win 3 consecutive Olympic gold medals! The first person to win 3 consecutive Olympics golds is Alexander Karelin of Russia, considered the greatest Greco-Roman wrestler ever, who did it in Seoul 1988, Barcelona 1992, and Atlanta 1996. China's Jing Ruixue takes silver. The two bronzes are divided among Mongolia's Battsetseg Soronzonbold and Russia's Lyubov Volosova.

In the Women's 48kg Freestyle event, Hitomi Obara of Japan won the gold medal, rallying to beat Mariya Stadnyk of Azerbaijan to get her first Olympic medal. Stadnyk will settles for silver. Canada's Carol Huynh will take one of the bronzes, and Clarissa Chun takes the other bronze, giving the US its first wrestling medal of the games. It would be a redeeming bronze medal match for Chun, who fought off Ukrainian Irina Merleni, who beat Chun for bronze back in Beijing 2008. This time, Chun prevails. 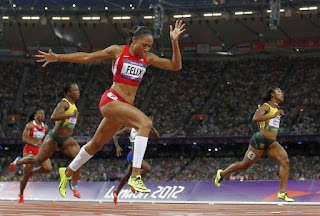 Over at the track, American Allyson Felix finally wins a gold medal in the 200m race, after coming in silver in Athens 2004 and Beijing 2008. The three time world champion had been bested in two Olympics by her Jamaican rival, Veronica Campbell-Brown. This time, Felix easily beat out a field of the fastest women in the world to takes first place. Jamaican Shelly-Ann Fraser-Pryce, who won the 100m race earlier in the week, takes silver. Another American, Carmelita Jeter takes bronze. Veronica Campbell-Brown ends up in 4th, and London 2012's 400m champion, USA's Sanya Richards-Ross finished fifth. 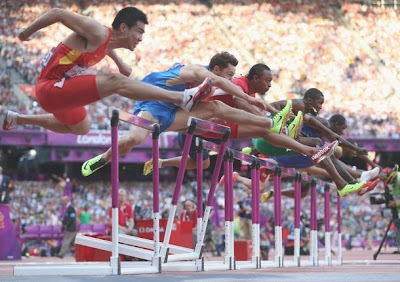 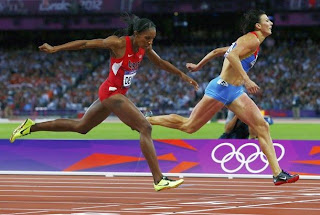 champion Lashinda Demus of the USA to win Olympic gold. It was an thrilling race as Demus took the lead. But Antyukh caught up in the middle of the race, then took the lead towards the end. Demus settles for silver, while Zuzana Hejnova claimed bronze for the Czech Republic. 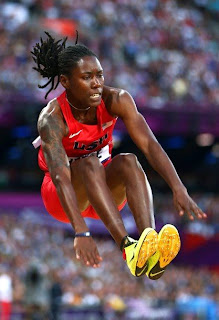 In the Women's Long Jump, American Brittney Reese takes the gold. Russia's Elena Sokolova won silver, while bronze went to American Janay Deloach. And it was a really close bronze win for Deloach, who held on to the podium by just 1cm! Deloach jumped a 6.89m and Latvia's Ineta Radevica would follow with a 6.88m!