Two weeks ago, I started to notice that my youngest stray, Nightwing was starting to put on weight. Not surprising, since I know two other neighbors in my building also feed him and the other strays. Good, I thought. I'm glad people are kind to the strays. It's a tough life for stray cats. Any bit of kindness helps them survive and thrive in a dangerous world.

Last week as I fed him, I thought, Hmmm, he is getting a bit chubby. But it made me feel happy, because he looked content. Nightwing was no longer a small kitten. He was a young adult now, and I was proud of how far he had come from being a scared, wild kitten at the dumpsters to a street wise cat, smart enough to know where to get a good meal and find a safe place to rest. 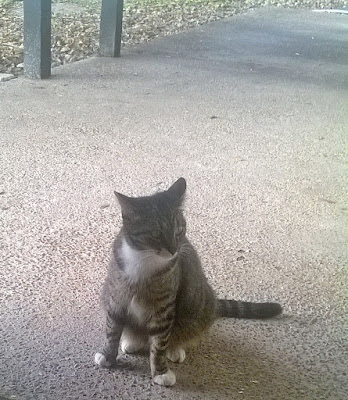 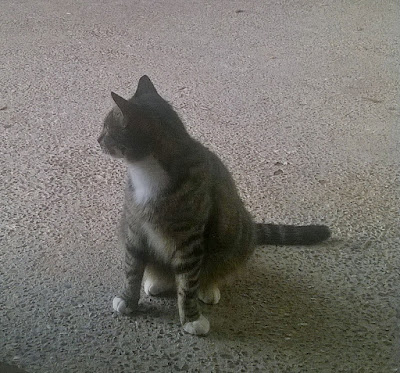 Today, as I fed the cats, I was suddenly struck by how rotund Nightwing was. Then it hit me. He wasn't fat. He was pregnant! And he was a she! Nightwing is a female, and she's carrying kittens! 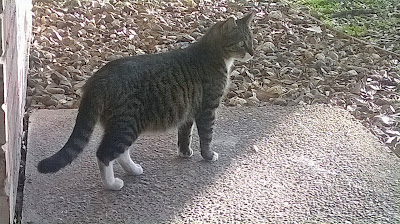 Good Lord, all this time I thought my little stray was a boy. I thought he didn't have testicles because he was too young and hadn't gone through puberty yet. Well, I was wrong. So wrong! And now I've got a knocked up cat!!! A teenage soon to be mom!

I was dumbstruck at the realization. At work, one of my coworkers told me how cats get it on, just like dogs, with the male cat usually biting the head of the female and lots of yowling from them.

I suddenly thought to last month, when I caught the upstairs neighbors pet black cat, Black Panther, sitting on top of Nightwing, growling and biting his head. I chased him away, because I thought he was being territorial and being mean to poor Nightwing. Three nights in a row, I had to come out when I heard the crying and yowling and had to chase Black Panther from attacking poor Nighwing.

To my horror (and dismay), I now know that they weren't fighting, but instead, they were getting it on! And I was interrupting their S&M session! The little kinky freaks!

How was I suppose to know? We had cats on the farm, but I never ever saw them get it on. Not like dogs. Dogs will do it anywhere, anytime and you know what they're up to. They'll do it in the middle of the road, at the entrance to a church, in the school yard in front of small children. They don't care. They'll do it right in front of you as you're sitting on the veranda on a hot day sipping iced tea. Dogs don't care. They just go at it.

But cats are secretive. I've never seen them get it on. It always seems to happen in the dark. Even fascinating, my coworker told me that female cats have this special ability to chose the father of each kitten. So each kitten can be only a half sibling with all its litter mates! What whores!

For minute, I experienced this irrational thought of calling Nightwing a slut, an irresponsible skank, whoring the night away. I can't believe I'm now dealing with a teenage cat mom! How could this happen? Then I realized, it's nature, and the cats are doing what comes naturally. Who am I to judge?

I suddenly thought of old cat, Storm Shadow. He was always friendly to Nightwing, sharing meals and even napping together. They even greet each other with a kiss to this day. Was he a possible father to her kittens, too? 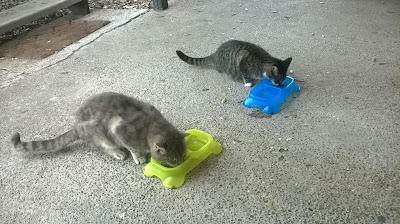 All I know is, things need to get done before those kittens are born. I'm trying to entice the knocked up stray to settle in my place. No luck. She'll visit and groom herself or explore for ten minutes, then she's at the door, ready to leave. I'll keep trying, because I don't want those kittens being born outside. It's still cold and wet this time of year.

I've all ready informed my upstairs neighbors that their cat knocked up the stray cat, so these kitties are their responsibility. There will be no deadbeat cat dads around here! If you didn't want kittens, then you should've had your cat fixed!

So far, they're excited and trying to do the same thing, coax the soon to be mommy stray to come into their apartment. No luck yet, but they're still trying, even though their cat seems none too pleased at having to share his space. Well tough luck! If you didn't want to share your space, then you shouldn't have knocked up another cat! 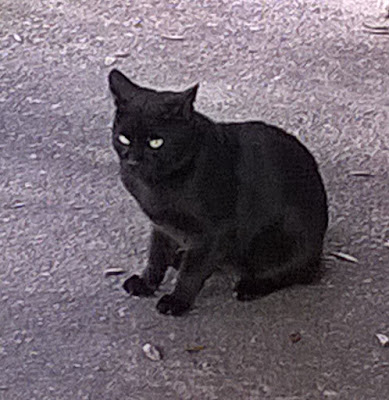 This is my new friend. I call him Sylvester. 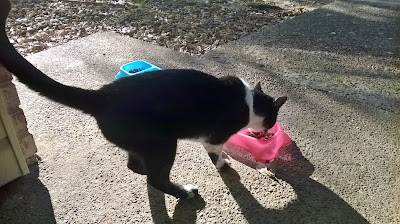 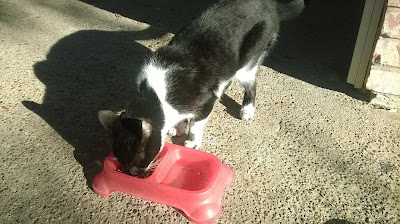 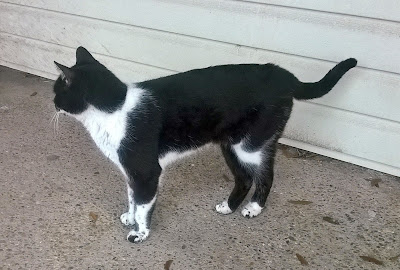 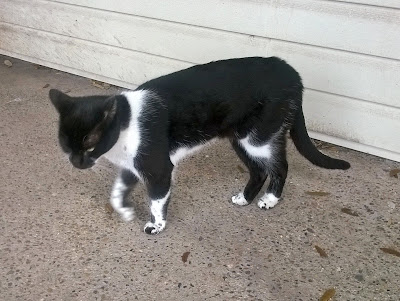 He reminds me of the Looney Tunes cat:

And he's also pretty muscular and fit, like another Sylvester:

He's very friendly. I'm not sure if he is a stray. He may be someone's pet. He looks very healthy. And it's the way that he is fearless around me and eagerly approaches, letting me pet him, and purring when he rubs against my legs that makes me think he is a pet, not a stray.

My two strays have a wildness in them. They're calm and come into my apartment, but there's always this wariness, this feeling that they're ready to bolt for the door, should anything surprise them. But they are friendlier now than when I first fed them. Still, there's a toughness that emanates from my strays, even when they're just relaxing on my porch.

I like the new cat. I first spotted him one evening as I was returning from taking out the trash to the dumpster. I noticed a white patch in the bushes. I called out gently, and out of the shadows emerged this cat.

He cautiously followed me home, sat on the porch while I got some food and water. He meowed and eagerly ate the food, hung out for an hour afterward, then went back out in the dark night--probably on some important cat business. I don't have the security clearance to know where cats go off to in the night.

It's been two weeks since he started coming around in the evenings for a meal. The two strays and the upstairs neighbors' black cat were unfriendly at their first meeting. There was much hissing and yowling from the other three. I had to stay out there to maintain an uneasy peace as they all ate.

Now the two strays tolerate Sylvester as they each eat at their own food bowl. But the upstairs black cat still hisses and waits for Sylvester to finish eating and leave. Then the black cat approaches and eats. That black cat is such a diva, but he makes me laugh.

I hope Sylvester really is someone's pet. And I hope he continues to come around for dinner for many years to come.

Scent of a flower: Jasmine

I love the scent of jasmines, especially the ones that are really fragrant and bloom at night. Sweet, ethereal, enchanting. It is a magical scent. 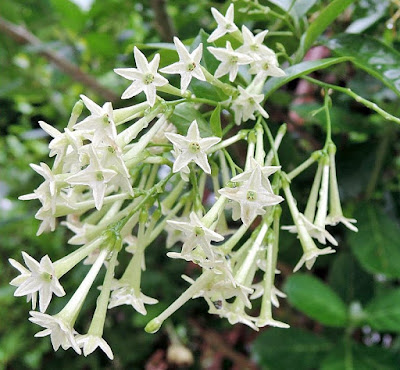 One hint, and I'm immediately transported away to a cool summer night, an adventure in a land far away; laughter and music in the air; dancing joyfully in the streets under soft lamps and twinkling stars; reveling at the sight of that stunning smile; haunted by your voice; mesmerized by those gorgeous eyes; excited and electrified every time we touched, longing for more; the scent of jasmine drifting in the air. Wonder and magic everywhere.

How marvelous it was enjoying the company of new friends in a strange, exotic land; living in the moment, feeling liberated, free, full of passion and bliss. Absolute ecstasy. I know there is a heaven, because I lived it with you those nights.

And no matter how far apart we are or how much time has passed; and truthfully, even when we are with others, the bewitching scent of jasmine always takes me back there, to a perfect moment of pure joy, always cherished forever more.