Today, I purchased 7 jars of honey creamy peanut butter.  Why?  Because the local supermarket chain had them on sale for 1 dollar a piece.  Also, I purchased 3 jars yesterday, also a dollar each: one crunchy-which I like; one smooth--which is pretty good; and a new flavor for me, honey creamy, which I really like!  I liked it so much that I went today to buy more of the honey creamy variety. 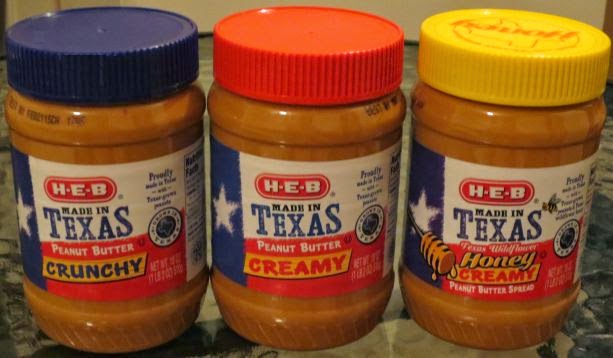 When I was young, I wasn't really a fan of peanut butter.  I mean, if I were to eat it, it would've been with jelly in between two pieces of bread.  I much preferred my bread to be buttered; even if it was toasted; it made it much easier to dunk it in tea or hot chocolate.  While other members of my family happily devoured the peanut butter, I bypassed it favor of just plain old butter on my bread (and crackers!).

When I grew up and left home, I never gave thought to peanut butter, much less eating it.  It wasn't something that I craved.  And for many years, I didn't eat peanut butter.  Then in college, for a community service project, I volunteered for a family support group for families going through divorce and having parenting issues.  Truth be told, it wasn't my first choice of community service projects.  I actually chose it, because it was a way to get close to this really fine girl I had in my biology class.  I learned during the course of our flirtation that she had been a volunteer there for a few years, since her high school days.  If I had wanted a fun service project, I'd've stuck with the sea turtles rehab and beach clean up; at least when it was all done, I could visit the turtles and go for a swim.

At the family counseling center, my job was to educate and help out with the kids (babies up to preteens), while their parents attended the support group.  In addition to teaching social and coping skills to the children, we also provided outside activities and healthy snacks for the children.  And the healthy snacks was were I encountered peanut butter again.

As a college student, my idea of a healthy snack was eating only half a bag of BBQ flavored potato chips, saving the rest for later.  If I wanted veggies, I 'd have bell peppers with my sausage and pepperoni pizza.  But seeing as how the volunteers had to set a good example for the children, I had to suck it up and find a way to make healthy snacks look and taste good.

And it wasn't just serving healthy snacks during the session.  It was an opportunity to teach the kids about healthy eating habits and learn where food comes from.  Most of the kids were between 6 and 8 years old.  We started talking about where food comes from.  Raisins?  I knew they were from grapes, dried in the sun; the kids didn't know that.  They didn't know that tomatoes were fruit, because fruits are the part of the plants that have the seeds.  And I felt pretty smug that I was educating and enlightening the kids.  Until the other volunteer, the fine biology girl, started asking kids about pickles.

Then biology girl said, "Yes! That's right!  Pickles come from cucumbers!  And they're called pickles because the cucumbers are pickled in a solution to turn them into pickles!"

And boy did I feel stupid!  I had no clue that pickles were from pickled cucumbers!  I honestly thought pickles came from a pickle plant!  Man, was I glad not to have opened my mouth when biology girl was giving the lesson!  It would seem that the kids weren't the only ones learning new things today.  And as embarrassing it was to realize that I had no clue where pickles come from (other than the jars on the store shelf), I was about to do something even more horrific.  I had to demonstrate to the children what healthy snacks were and eat them in front of the kids!

The kids were listening to my spiel about how healthy carrots were and how they were good for the eye sight.  They looked eagerly as I summoned up my courage and picked up the baby carrot and dipped it into the small ranch dressing cup I had in front of me.  I had a fake smile on my face to cover up the horror of having to put that carrot in my mouth.

I bit down.  Crunch.  And I had to summon up all of my acting skills not to make a disgusted face as the terrible texture and horrible taste of carrot hit my tongue.  I had to fight to hold back my gag reflex.  It took all of my strength to smile and make a "mmm so good" sound as I continued to chew up that gawd awful snack!  I could still taste the raw carrot even after washing it down with some water.  I wish I could say the horror ended there, but no, my job was not done yet.

I had to pick up a celery stick and dip it in the ranch dressing cup.  I braced myself for the worst.  Surprisingly, it wasn't as bad as I thought it would be.  I didn't have to fake smile as much as I did with the carrot.  Even better, when I tried the celery stick with the crunchy peanut butter, I was blown away by how good it actually was!  I was genuinely enjoying it, and I was very happy and relieved to see the kids embrace the healthy snacks and dig in.  The lessons were a success.  And over the course of the year, I actually came to enjoy eating the carrots with ranch dressing.  But peanut butter with celery was a revelation to me.

I stayed a volunteer for over two years until the support group merged with another larger social services agency and relocated to a different area and the session times conflicted with my schedule.  But I was very thankful with the time I spent with those kids, and it was such a joy to see them come out of their shells and embrace new skills and learn new things, helping them through some of the most stressful times of their very young lives.

Over the years since, I would get a craving for peanut butter and celery and I'd buy it.  I don't get these cravings all the time.  And there are periods where I go for almost half a year without eating peanut butter.  Then I find myself with left over celery or I see peanut butter on sale, and I immediately think of getting some of that peanut goodness.  Tomorrow is the last day of the sale.  And I plan on buying more jars of peanut butter.  At a dollar a piece (which is like 2/3 off the regular price), it's a steal of a deal!  I very much doubt the ten jars I all ready bought will last past the summer.

Today, I decided to do something nice.  I had the day off, and instead of lounging on the beach, I went ahead and renewed my driver's license early, updated my insurance, and with a few hours left over in the afternoon, I decided to do my part to help save someone's life.  I went to the local blood bank and donated blood.  Well, I did plan to donate blood, but as it turns out, the blood center needed my plasma even more than my blood for the local hospitals who urgently requested it for some critically ill patients. 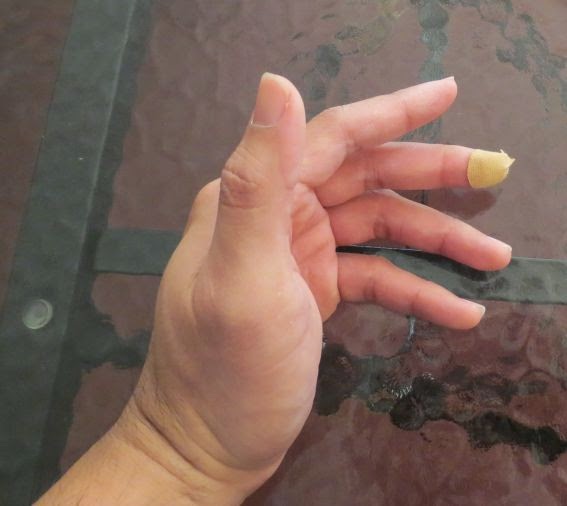 So, I filled out a questionnaire, had my vital signs and quick history taken, then was given a tiny pin prick on my finger to test for iron in my blood.  And I got to admit, that tiny prick on my middle finger still stings a little.  How do people with diabetes cope with this kind of finger stick blood draws every day?  If my finger is still tender from one finger stick, I can't imagine how sore it'll be from checking my blood glucose levels several times a day.   But a little sting is a small price to pay to help someone heal and maybe save their life.

I was then taken to the room where the large recliners were next to the large machines that would do the apheresis--take my blood, separate out the plasma, then return the red blood cells and platelets back into my system along with a solution to replace the plasma I was donating.

The staff member that put the IV access in my arm was very skilled.  I didn't even feel the needle go into my arm!  The machine was pretty interesting and it was really neat to watch my blood going through and seeing the plasma end up in the donor bags.  I spent the next 45 minutes watching the machine, the tv, and making conversation with the staff and the one other donor there.  800ml of plasma in 50 minutes, and I was done! 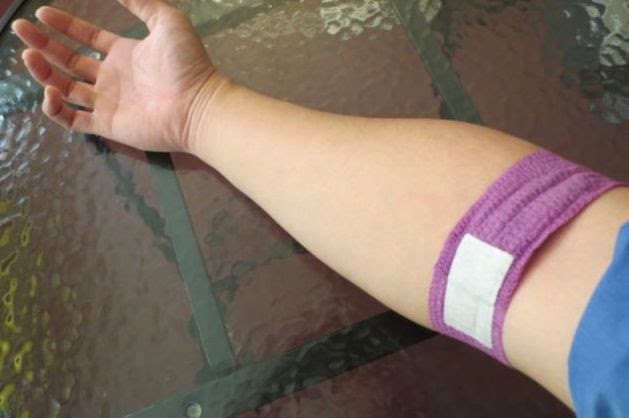 The IV was removed, a bandage and wrap was placed around my arm, and I was once again given instructions about what to do after donating plasma.  No smoking for 4 hours; no heavy lifting; leave the bandage wrap on for at least two hours; and my favorite, eat a large meal!  And as an unexpected bonus, I was given a snack and some small donor swag: As a reward for doing something worthwhile today, I decided to stop by a local fast food place to get some shrimp and fries; and then on the way home, I stopped at Taco Bell and got 4 grillers, each a different variety.  Hey, I was told to eat a large meal after donating plasma. And I think I earned it.

You have nothing to lose but the time you waste on the internet doing useless quizzes!

I recently took the Great British Class calculator, not because I am British or looking to define my class status.  Rather, I had some free time.  And instead of using that free time to do something useful on a chilly day, like putting the caster wheels on the wire shelves or cleaning out the closets, I narrowed my choices down to internet surfing or video games.  Since I have a video game addiction, I naturally opted for internet surfing.

I'm not British, and I have no clue what makes a person a commoner or a noble; I'm guessing to be a royal, you're either born into it or marry into it (and not get kicked out, which I'm pretty sure is preferable compared to getting your head chopped off as the alternative to exiting the royal family).  In some places, class is determined by pedigree, where you're born and which family you were born into; in other places, you earn it, through study and work; but I think for most places, it comes down to wealth, to money, those who have it and those who don't.  And according to the Great British Class calculator, I don't have a lot:

The results say that I am an Emergent Service Worker, which is one step above the Precariat, the lowest and poorest of all the classes! 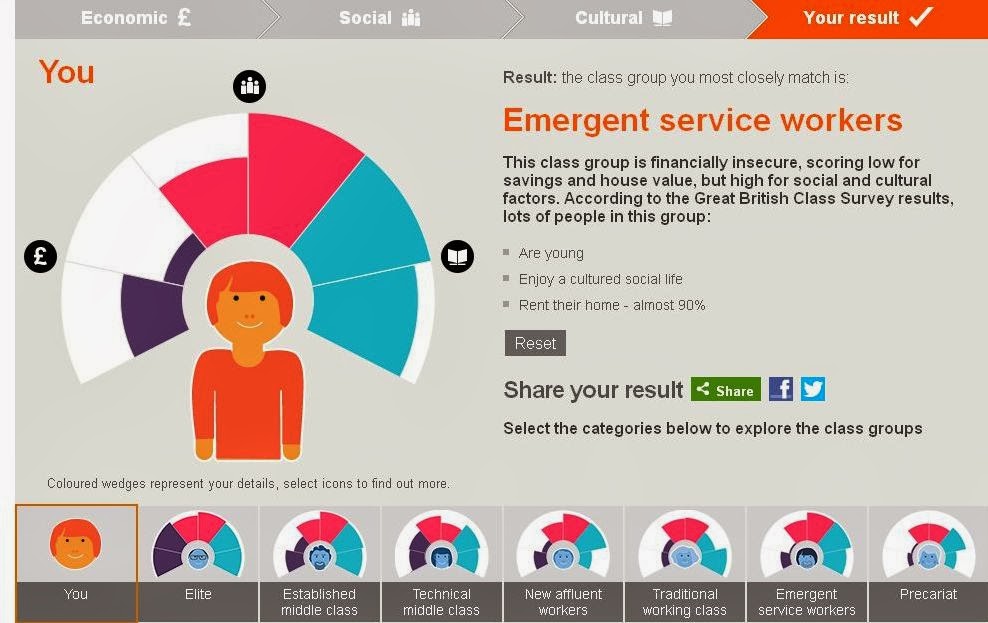 This class group is financially insecure, scoring low for savings and house value, but high for social and cultural factors. According to the Great British Class Survey results, lots of people in this group:

Which I shall translate into American English as:  I am broke, but I'm lots of fun, and quite possibly, fabulous!


So, which class are you?