In case you didn't know, InexplicableDeVice and Tim are in the process of creating a new Coven, as three of their former members have left the astral/internet plane for more pressing matters on the ground. No one knows for sure what secrets the Coven holds and how its members are chosen. But secret footage has been leaked out!

People have mysteriously vanished in the course of capturing and secreting out this footage.

Behold, it's tall blond IDV interviewing buxom brunette CyberPete for a position in the Coven.

Warning: This footage is not for those of a delicate nature.


Did CP make it? Who else is going to join this new Coven? And was Kiss harmed in making of this footage? Let's hope not. 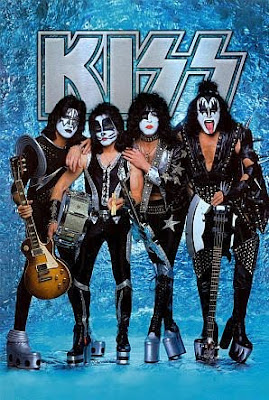 Running in the dark

It's been about two weeks since I was able to get back into running again before the sun rises. Heavy rains and a busy work schedule kept me from my usual running routine. I like to run in the early dark hours of the morning, because it's cool and quiet, less traffic on the roads, too. On really clear nights, I can see the moon and stars. Most times, I'm alone on the roads. Every now and then, some cyclists would pass by and there'd be the odd runners that cross my route. I've seen people running in pairs on some occasions, but I never see them again, at least not regularly when I run.

But there is one who did keep up with me, for at least part of my route. The first time I noticed him was three years ago, when I took a different route home. He kept up with me for about half a mile, then he took a different path while I continued on home. I'd see him maybe two to three times a week, always there to keep me company part of the way. He'd never be out when it rained, of course, but he was there enough for me to take notice of him when our paths merged for part of the way. We never really talked, but there was a natural ease that came with our company. We just happened to share the wide open spaces on our journey. And after a while, there was a familiarity there that I looked for when I was on the last leg of my run. I knew that I was almost home when he joined me on my route.

He was shorter than me, but he had a presence that made him seem bigger than he was. He exuded confidence and energy and serenity, focused on his route, just as I was. Over the course of three years, we never really spoke to each other, just a quick nod of acknowledgment, a simple greeting. There was a camaraderie that came with just us sharing the path for part of our journey. No matter how tired I was, having him join my path re-energized me and made me try even harder, dig deeper, will myself to keep going just a little bit longer. Perhaps we motivated each other, or at the very least, he inspired me to keep on going. If someone as small as he was could keep on going, then so could I.

I didn't realize how much I looked forward to his company, as I never really thought about him after my run. I mean, there were times when I thought that maybe I ought to invite him over for a drink, to introduce myself properly and get a chance to get to know each other better. But those thoughts were as fleeting as the leaves the wind blew past us on some nights, forgotten the moment they left my sight. As soon as I ended my run, I'd think about taking a shower and getting ready for the day. The rising sun would only remind me of the tasks that lay ahead and the work I needed to get done. The ethereal world of running in the dark would fade away, along with any thoughts I had during the night. It was like waking up from a dream, and I could not remember what the dream was.

This morning, though, on the way back home, I kept an eye out for my running companion, to see if he would join me again. But he wasn't there at the corner where he usually met me. I doubled back, did a loop and returned to the corner, hoping to see him there. But there was no sign of him anywhere. So I kept going forward, all by myself. I ran on until I made it home. Usually, after a good shower and getting ready for the day, I'd forget about my run and go over on my plans for the day. But this morning was different. This time, the morning sun didn't take away the thoughts I had during my run under the starry, dark night. This time, I felt like I woke up with a very vivid memory of my dreams.

I thought it odd that I had not seen my running companion in a while. Strange that I would miss the sight of his small frame, keeping pace with me, falling into cadence as we ran in the dark night. I've not seen him for two weeks now, and I started to worry about what could've happened to him. Strange how I somehow feel like maybe I should've tried harder to be more social and invited him over for a cool drink after a long run.

All week I've been trying to keep a lookout for him when I'm out running. In fact, I've been running a lot more than I usually do in the hopes of running into my companion again. But I've come to the sad realization that he might be gone. Perhaps he moved. And I'm hoping he moved to somewhere better. The truth is, I find myself missing his company. Which is kind of funny, considering that one of the joys of running for me is the solitude, just me and the wide open spaces, pounding the pavement in the cool dark night. It's not that I need the company or want someone to join me on my pre-dawn runs. No, that's not it. I like running by myself. I just didn't realize just how much I did enjoy having company on the run, even for a brief part of the way.

I'd like to think the my running companion has moved on to a better place, be it a new home or the next world. Wherever he is, I wish him well, and I'd like to thank him for his pleasant company on those dark nights. He was a good companion, and running with him on those cool, starlit nights gave me a glimpse of what ancient man must have felt when he had a companion join him on his journey into the wild, unknown world.

So, wherever you are running companion, I hope that you are well. You've been good company and you're an amazing little dog. I hope your owners realize just how lucky they are to have you. You truly are man's best friend, and our journey into the world has been made all the better for having you join us along the way.

Mud and Puddles
Running with the devil

The Wet and Dry Experiment

It all started about a month ago during a conversation with some coworkers. The topic of pets had come up, and while I don't have any pets, there are two stray cats that hang out at my apt building, specifically on my porch. They came with the apartment. Everyone in my building takes turns feeding them. And when I mentioned to the other coworkers that I fed the cats tuna from a can, one of them expressed shock and dismay, saying that cats can only be fed cat food. That led to a debate about dry cat food versus wet cat food and which one was better for the cats. Suffice it to say it was a very slow day at work when the hot topic of conversation was cat food.

Since we never did settle which was better for the cats, I decided to do a month long experiment to see which food the cats preferred--wet or dry. Mind you, I spent hours of research online and asking other cat owners which brand they'd recommend. Who knew that cat food came in all sorts of varieties?

For the first week, I bought a bag of dry cat food. For a whole week, I fed the cats dry cat food every day. Some days, they'd eat everything. Other days, they'd only eat half. I made notes of my findings. The next week, I tried out the canned wet food. Once again, there were days when the cats ate all the food; and then there were days when they ate about half. Interesting. Finally, today, I decided to mix the wet and dry cat food together, to see if the cats had a preference. The results? They ate everything. After comparing my notes and going over the data a few times, I came to the conclusion: Cats will eat anything when they're hungry.

Wet or dry, it doesn't matter. Cats have been eating lots of things for thousands of years--from rats to birds to fish to bugs. They certainly did well without commercial cat food. So as far as I'm concerned, the debate between wet food vs dry food is over. And that means when I run out of the dry and wet cat food, I'm feeding those stray cats some tuna and left over chicken and fish. They certainly seem to enjoy those morsels when I feed it to them.
***Posted by eroswings at 9/03/2010 01:43:00 AM 15 comments: