Day 14 of the London Olympics was all about the athletes doing their best to show off their strengths and skills. Some would shine, others would shimmer, and some would fade away.

What a fantastic performance by the world champion American team in the women's 4x100m relay race! The United States team of Tianna Madison, Allyson Felix, Bianca Knight, Carmelita Jeter not only won gold, but they set a new world record of 40.82 seconds, beating East Germany's record of 41.37, which had stood since 1985, 27 years ago! 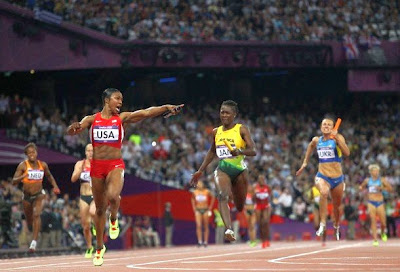 And it's an even sweeter victory for the US, who last won an Olympic gold in the event in Atlanta 1996, 16 years ago! At Beijing 2008, the women didn't even qualify for the event due to dropping their baton. But with this world record win, they return the USA to the top of the track after a long absence from the top of the podium. The Americans' rival, Jamaica, finished far behind in second, taking silver; with Ukraine claiming bronze.

Big news in the men's 4x400m relay. In a stunning display of speed, Ramon Miller of the 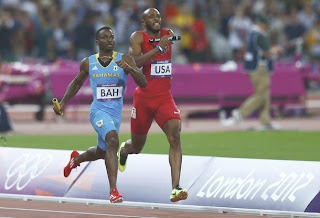 Bahamas chased down Angelo Taylor of the United States in the men's 4x400-meter final to win the gold! It is the first time the US has lost the event. The US has always won this event since the Los Angeles 1984 Olympics! The US had also won the event in Montreal 1976 but boycotted the Moscow 1980 Olympics. The American team was plagued with injuries coming into these games. World champions Lawshawn Merritt and Jeremy Wariner both pulled out before the qualifying heats, where Manteo Mitchell broke his leg during the race. Angelo Taylor, a 400m hurdler was suddenly thrust into the lineup, where the 3 of the top members were out due to injuries.

From the very beginning of the race, the Bahamas team pulled ahead. But in the third leg of the race, American Tony McQuay kicked it into high gear, posting the fastest time out of all 32 runners (43.41s) to overtake Bahamian Michael Mathieu and hand Taylor the lead. Taylor tried to keep the lead, but it soon became obvious that he was falling behind as Miller overtook Taylor in the last 150m of the race, going on to win Bahamas' first ever gold medal in the race. It is also Bahamas' first medal of the London Olympics. Trinidad and Tobago claim the bronze.

In that same 4x400m relay race, another team also lost a valuable member to injury. South 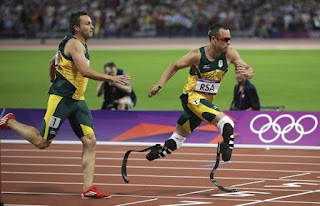 Africa was originally disqualified from the semifinals, when their runner, Ofentse Mogawane was involved in a crash, failing to pass on the baton to the next runner, Oscar Pistorius, the double amputee athlete who has inspired so many at these Olympics. The South Africans appealed and the officials ruled in their favor, because the Kenyan runner Vincent Kiilu did cause the collision with Mogawane. The result of the appeal meant that South Africa was awarded a place in the finals. But with their best runner, Mogawane, out of the race due to a shoulder injury as a result of the crash, the South African team never stood a chance to medal. And in the race of 9 countries in the final, South Africa would place 8th. Cuba did not even finish the race. Though South Africa did not win a medal, they did win the hearts and respect of so many spectators and athletes present, because the last runner, the anchor for the South African team, was Oscar Pistorius, who has all ready made history as the first double amputee to compete at the Olympics. In two weeks, Pistorius will go on to compete in the Paralympics, after leaving an unforgettable mark at the London Olympics. 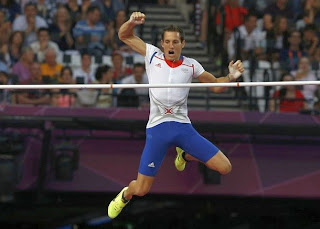 Over at the Men's Pole Vault, Renaud Lavillenie of France broke the Olympic record by being the only athlete to clear 5.97m. Defending Beijing champion, Australian Steve Hooker, plagued by injuries, was unable to podium. It was a 2, 3 finish for Germany as Bjorn Otto won silver, with compatriot Raphael Holzdeppe claiming bronze after both cleared 5.91m.

It's a golden day for the orange Netherlands, as they fend off world champions Argentina to win gold in Women's Hockey, 2-0, successfully defending their Beijing title. In addition to Beijing 2008 and Los Angeles 1984, the Duch now have won gold 3 times in the sport. Great Britain takes bronze after winning their match against New Zealand.

And what a stunning upset in the Women's 5000m run! Ethiopia's Tirunesh Dibaba was favored to win and defend her Beijing title, had all ready won the 10000m run earlier in the games. She was poised to become the first woman to win the 5000m and 10000m races in back to back Olympics, when she lead the last four laps. But in the last turn til the finish line, Meseret Defar, a fellow Ethiopian, surged forward and claimed the gold! Dibaba would fade back to bronze, as Kenya's Vivian Cheruiyot who was 3rd in the 10000m run, would pass Dibaba for silver. It is a surprising gold win for Defar, who won the Athens 2004 title, but since then had been considered second best to Dibaba. It is a magnificent win for Defar, to come from behind and overtake the heavily favored Dibaba and claim the gold. To watch someone unexpected come forward and win the race is what makes the Olympics so great. 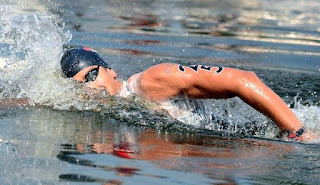 Exciting news over at the open water 10km Marathon Swim! Tunisia's Oussama Mellouli became the first swimmer ever to win pool and open water medals at a single Olympics. Mellouli won gold in the 10km marathon swim, after winning bronze in the 1500m pool event. It was no competition in the last 300m of the marathon swim, when he pulled far ahead of his competitors who were left to fight for second and third. And it would be Germany's Thomas Lurz who swims to silver, with Canada's Richard Weinberger catching bronze.

Meanwhile, there has been a controversial development in the Women's Triathlon, which was contested on 4 Aug 2012. It is the first ever Olympic triathlon to be decided by a foto finish. Switzerland's Nicola Spirig was ruled to have won gold, but Sweden launched an appeal using the foto finish to argue that it was Lisa Norden of Sweden who actually crossed first with her head. Now the Court of Arbitration for Sport has to make a decision by Saturday to determine the winner and how the podium shake up will look.

Over in Men's 75kg Wrestling, Jordan Boroughs becomes the first American at the London Olympics to win a wrestling gold by beating Iran's Sadegh Goudarzi. Uzbekistan's Soslan Tigiev and Russian Denis Tsargush each claim one of the weight division's two bronze medals.

South Korea's Hwang Kyung-Seon defended her Beijing title, taking gold by beating out European champion Nur Tartar of Turkey in Women's 67kg Taekwondo. Hwang, having won the bronze in Athens 2004 and gold in Beijing 2008, now becomes the first woman to medal in taekwondo in three back to back Olympics. USA's Paige McPherson and Germany's Helena Fromm each won one of the two bronze medals.

And South Korea continues to rake in medals in a fast and furious game with Japan, taking the bronze medal in Men's soccer. It was a rough game from the start, with plenty of fouls given to both sides as the game went on and the players got physical. South Korea was very aggressive and took many chances to attack the Japanese defenders, scoring 2 goals to none. The Japanese try to bounce back with a goal, but it was disallowed because of a foul on Korea's goalkeeper during the play. Japan was never able to match South Korean momentum. South Korea now becomes only the second Asian nation to medal at the Olympics; the first, being Japan who won bronze at Mexico City 1968.

And finally, we come to the most beautiful and enchanting of all the Olympic sports: The sparkling, scintillating, sensational sport of Synchronized Swimming! 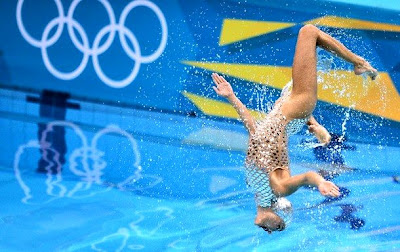 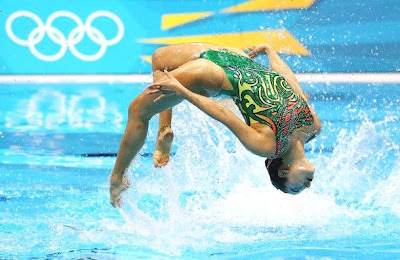 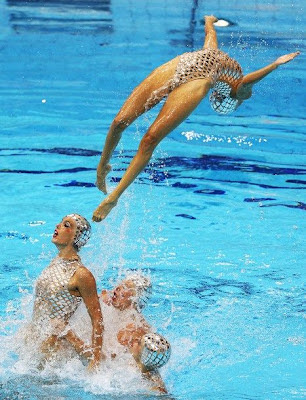 No other sport comes close to combining the challenging athleticism and unique artistry of the most beautiful sport in the Olympics. I'd like to see if Michael Phelps and Ryan Lochte can swim in the pool upside down, holding their breaths underwater and kicking and scissoring those legs in intricate, synchronized patterns. I'd like to see Usain Bolt try to make expressive faces while he dances and bobs his way across the pool. 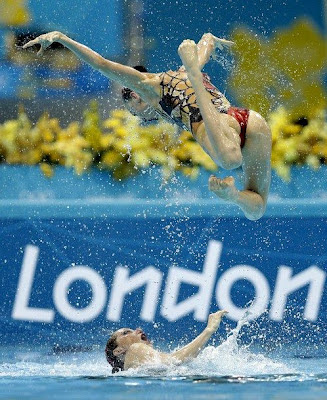 It's no surprise that for the fifth Olympics in a row, Russia has won gold, both in the duet and 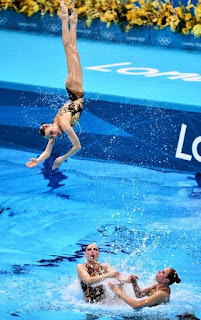 team event. And there's a reason why they are the world champions and Olympic champions. No comes close to being original and creative and exacting and the Russians when they give their performances. No one kicks higher or throws team members farther or more often than the Russians. They set the standard. All the other teams are fighting for silver and bronze.