Once again, it's my favorite time of year! The Olympics are here! And I've spent the last few days reveling and immersing myself in all the Olympic glory. 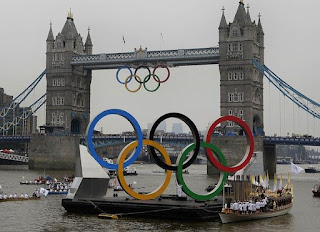 What a fantastic and amazing Opening Ceremony for the London 2012 Olympic Games!

I absolutely luved the celebration of Britannia myth and history and culture!

So many wonderful volunteers and performers! I enjoyed every act and performance!

I was amazed by the beauty and the creativity that went into the lighting and the raising of the Olympic cauldron! 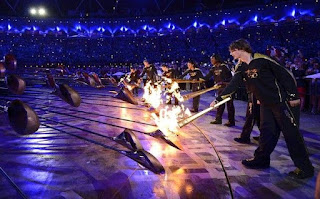 What a wonderful idea to have Britain's young athletes carry the Olympic flame and Britain's hope for future heroes who will grow to represent the best and brightest of the nation and its people. 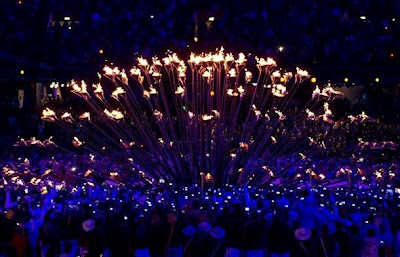 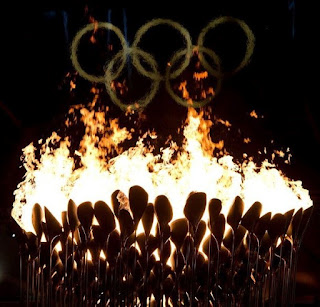 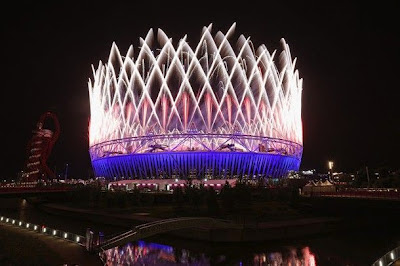 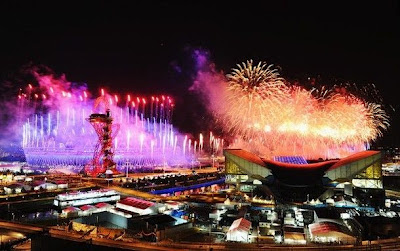 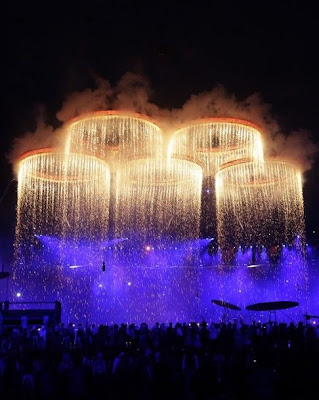 And I laughed out loud at the James Bond and the Queen sequence, and I quite enjoyed Mr Bean's scene. The nurses and doctors and children's scene with the literary icons from Peter Pan to Alice in Wonderland and so many others was entertaining. If anyone in Britain is reading this, I'd like a flying lighted umbrella like the one Mary Poppins uses. And the various dance and musical numbers were just amazing. 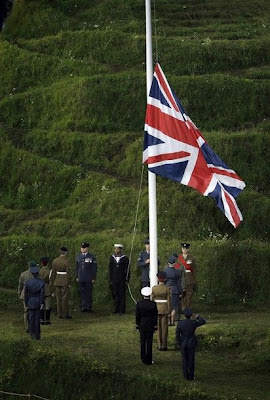 But of all the performances and wonderful scenes in this fantastic and wondrous opening ceremony, the one that I found most moving is of the armed service men and women carrying the British flag and raising it high for all the world to see. I have always admired the bravery, the honor, and the sacrifices these young men and women have made to defend and protect their country and their loved ones.

In the ancient Greek world, a truce was held among the warring city states, to ensure that the athletes would participate in the Olympic Games, to celebrate and honor the gods, to marvel and rejoice in the strength, speed, and endurance of the human body and spirit. How fitting it is to see these soldiers and sailors, marines and guards, come to these Olympic Games in peace, and how the countless many of them are standing guard to ensure the safety of the athletes and the many people who've come to see them.

In 1908, Rome was to host the Olympic Games, but an eruption from Mount Vesuvius forced a change in venue. It was London who stepped up and hosted the Games for the first time. In 1948, after World War II, there was talk of the Games going to United States due to rationing and financial difficulties from the war. But London stepped up again and hosted the Games to give the weary world something to celebrate, a small light of hope among the devastation left by the war. How fitting it is, that in this time of global economic uncertainty and unrest, it falls to London to step up again for the third time to host the Games, and give the world a chance to come together in peace, and to celebrate the human spirit to rise above adversity and succeed in the face of so many challenges.


We were all amazed at the scope and brilliance of the Beijing Olympics. How grand a spectacle that was, to see so many, vast numbers of people come together to work as one. And we were left wondering, could any city follow and do something just as amazing? Well, wonder no more; because London showed that it can do something just as fantastic and spectacular as Beijing or any other city that has graciously hosted the Games. If the spirit of China's massive Beijing Olympics Opening Ceremony was about harmony, then the spirit of Britain's London Olympic Opening Ceremony was about celebrating diversity and rising above adversity. It was an incredible opening ceremony, London! You've done an amazing job, and thank you for welcoming us and for giving us a place to come together and celebrate!

I have to admit that the first three days of competition were loaded with so many great moments. To list them here is to akin to repeating all the fantastic events. Records were broken, hopes were dashed, dreams were realized, so many tears of joy and sadness, so many emotions to behold. Right now, two moments stand out for me. 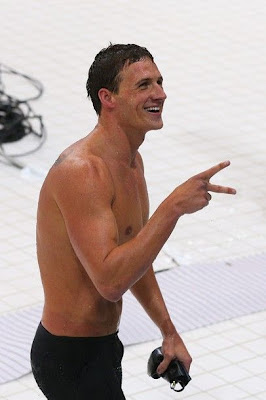 The first is US swimmer Ryan Lochte winning gold in the Men's 400m individual medley. Never mind that his teammate, rival, and friend, superstar Michael Phelps didn't even make the podium. What was memorable to me was that Ryan was finally getting the recognition he deserved. For years, he had been relegated by the media to Michael Phelps shadow. People forget that it was a team effort that helped Michael Phelps win those gold medals in Beijing. And among those in the team were great swimmers like Ryan Lochte. Coming into these Games, so many people in the media hyped the belief that Ryan Lochte was just a pretty boy who would never beat the great Michael Phelps. How sweet it is to see Ryan Lochte prove his critics wrong and finally get the respect he deserves. He has worked hard to get to this level, and he's earned his place among the champions of swimming. 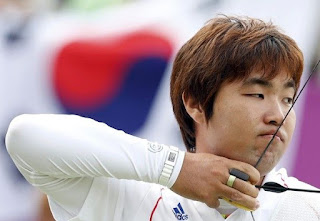 The other standout for me has to be South Korean archer Im Dong-hyun. He's been on the South Korean gold medal winning team for the 2004 and 2008 Olympics; and he's set a new world record at the 2012 Olympics. So what makes this three time Olympian so special? Well, he's legally blind! When asked how he was able to see the targets, he replied that he looks at the color differences in the target lines and aims for the blurry center. In case you're wondering if he's competing in the Paralypmics, the answer is no. Why? Because there are no blind archery events at the Paralympics! There are archery events for amputees and cerebral palsy Paraolympians, but none for blind athletes. Still, Im Dong-hyun is doing remarkably well this Olympics. And I can't wait to see what else he does in the future.

The first few days of the Olympics have been amazing. And I look forward to seeing more outstanding athletes doing extraordinary things at the London 2012 Olympics.