I was tagged by the fascinating Inexplicable DeVice, to do this meme of 41 semi sentences, wherein I supply the answers to complete the sentences. I've spent several days pondering some of these answers, and mostly, I just wrote down the first thing that came to mind. I have to say that some of these semi sentences made me laugh. Others made me think. But mostly, it was fun to complete. Ready? Let's go:

1) My mother once: saved me from drowning. I was four, and I went into the deep end of the lake, despite my mother telling me not to get in the lake yet. Lucky for me, she was a strong swimmer.

2) Never in my life: have I watched Bambi.

3) When I was five: I saw a ghost. She was an older woman wearing white, and she was standing outside the window, looking into my aunt's house the night before my cousin's wedding. No paid me any mind as I kept telling them that there's a lady by the window. I suppose it's easier to ignore the child playing with trains and pay attention to a game of cards instead. That night, my mother dreamed about her sister, who passed away recently and was buried while my mother was out of the country. She was buried in a white gown. The next morning, my mother took some flowers and went to visit her sister's grave in a town several hours away. She barely made it back in time for the reception. But she said she needed to say good bye to her sister, so her sister's spirit could move on. I never saw the lady in white again.

5) I will never forget: Greece!

6) I once met: an albino. Lucky for me, he wasn't Opus Dei, or he'd've come after me for saying that Mary Magdalene wasn't a whore. 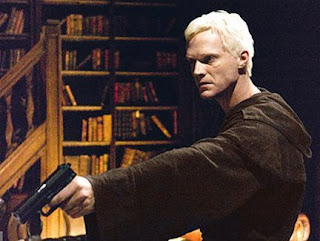 *"And I will strike down upon thee with great vengeance and furious anger..."~The Gospel according to Pulp Fiction

7) There's this person I know who: is a lot stronger than they believe, and more vulnerable than people know.

8) Once, at a bar: I won a karaoke contest--mind you, most of the patrons were drunk, as was I.

11) If only I had: a flying carpet. It would make getting to places so much faster, and it would be economical. Not to mention, I wouldn't have to worry about parking. 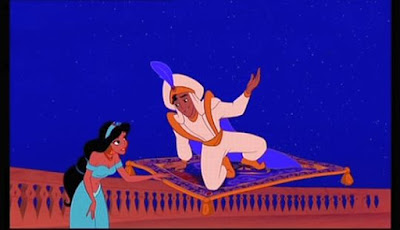 
12) Next time I go to church/temple: I hope it'll be for a festive occasion, with the promise of free food--no suicide kool aid, thank you very much!

13) Terri Schiavo: Yeah, I drew on blank on this one for a few days, and I refused to google it. I couldn't figure out if it was a person, place, or thing. Then I thought, an athlete, perhaps? Then today, it came to me. The feeding tube lady--or the one who was kept alive by artificial means and was the subject of the right to life/death debate. All I know is, one should have a living will to do deal with these things. It'll make things so much easier!

14) I like: big butts and I can not lie!
You other brothers can't deny
That when a girl walks in with an itty bitty waist
And a round thing in your face
You get sprung!

Okay, I couldn't resist. It was the first thing that came to mind!

15) When I turn my head left, I see: a shelf full of decorative items that were gifts.

16) When I turn my head right, I see: the living room window with the blinds closed. It's late at night and I don't want the people looking in my window and seeing me in my underpants...again. I should charge them a fee!

17) You know I'm lying when: I tell you I like eggs over easy--bleh. Seriously, I hate runny eggs! They're disgusting! Raw eggs are the fertile breeding grounds of salmonella! You might as well lick chicken butt!

19) If I was a character written by Shakespeare: I'd demand royalties! That mofo owes me centuries of back pay!

20) By this time next year I: hope to have visited another wonderful place!

21) A better name for me would be: whatever you want it to be, for the right price ;)

22) I have a hard time understanding: homes that have more bathrooms than bedrooms. Seriously, what's up with that?

23) If I ever go back to school, I'll: take more fun classes, like cooking or ballroom dancing or windsurfing.

25) If I won an award, the first person I'd thank would be: the one who believed in me and encouraged me.
*And if some egomaniac, has-been mofo grabs my mike and interrupts my speech, I'll bash him over the head with my award before I proceed to kick is a$$!!!

28) My ideal breakfast is: fried chicken, potato salad, and corn on the cob. What? I've had this for breakfast before!

29) A song I love but do not have is: a song I'll soon download when I find it on the internet! I did just acquire Jason Mraz's I'm yours a few days ago.

30) If you visit my hometown, I suggest: you wear sunscreen and enjoy the beach and food.

32) Why won't anyone: find the missing Borg Baby from Star Trek Voyager? You know the one! It's the one that Seven of Nine saved along with those other Borg children. We know what happens to the 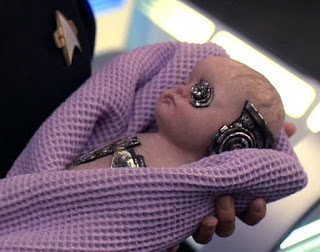 other Borg children, but we never see the baby again.

I've tried to research the whereabouts of the Borg baby, and there have been many theories. Some say Neelix cooked the baby--baby back ribs! Others say it was incorporated in the Voyager mainframe when they had to upgrade to Windows 7. I suspect it was used as a laptop for those away missions, when the away team might want to watch movies or surf the internet. But seriously, why hasn't the captain issued an amber alert? For crying out loud, there's a missing baby on the spaceship!

34) I'd stop my wedding: if I wasn't in love (or the other concubines in the harem were unhappy and I didn't feel like banishing them from my sultanate).

35) The world could do without: ignorance and hate and pollution.

37) My favorite thing is: whatever happens to make me smile and feel good at the moment. Right now, it's listening to music.

40) The last time I was (really) drunk: was last week. But I'm a happy, mellow drunk, and I haven't passed out and woken up in strange places in years!

41) My grandmother always: is a mystery, as I don't know her, have never met her, and she passed on long before I was alive. I'd like to think she was wonderful, though, as my mother missed her and loved her very much.