They came hidden in the shadows. Their vast armies crossed the unguarded borders unnoticed. By the time their invasion was discovered, they had penetrated into the most important regions, pillaging and raiding. They wield incredible strength and move fast. They carry sharp weapons. Some of their kind have burned their way across the land. Their scouts spread far and wide. They are smart, driven by their powerful queen in their conquest to expand their empire. Their strength lies in their overwhelming numbers. They cannot be stopped by physical force alone. They are too many. For every one of them struck down, another takes their place. They carry back their own dead from the battlefield.

I'm a peaceful man. I've tried to avoid conflicts. But there comes a time when even a peaceful man must take up arms to defend that peace, to fight for what is rightfully his. This enemy is fierce. They cannot be reasoned with. They do not understand. There cannot be any peace with them, we cannot coexist. They are driven by instinct to conquer and devour. War has come.

I have been fighting them for several days now, hoping to stop their onslaught. But still they come, still they survive after I've wiped out their comrades in battle after battle. I worry that they may only grow stronger. I have no choice. I fear that the only weapon strong enough to kill them is one that is poisonous to me as well. But that is a chance that I have to take, it is my hope for victory.

There is no other way to stop the march of the ants. 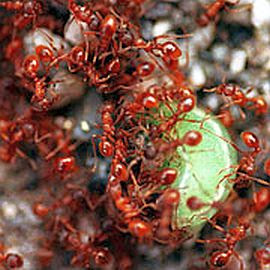