It was a loud boom that rattled my window and shook the building, jerking me awake from my sleep, my heart was pounding fast and furious. I opened my eyes to darkness, then suddenly I was blinded by flashes of white light, followed by another loud boom, shaking the bed once more. A thunderstorm. Except, I didn't hear any rain. I looked over at the alarm clock, but it was out. The power was out. I reached for my watch, pressed the light button, and saw that it 4:18 a.m. I sighed, roll over to the side of the bed, sat up for a few seconds before walking over to the window. I looked out, and only saw more flashes of light followed by more thunder, rumbling and 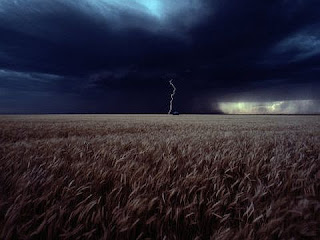 shaking the grounds. No rain, though. But I couldn't see any stars. Just dark clouds, low and heavy. It was only a matter of time before the rain came. For now, the skies lit up as the lightning danced in the clouds and struck the earth with a frightening roar. I went back to bed and laid down.

About a half hour later, it did rain. Heavy, steady, pouring, lulling me to sleep. I've always found the sound of rain to be comforting, peaceful, even when it was pounding loudly on the tin roof of the house I grew up in when I was a small child. So I pulled the covers up and curled into the welcoming embrace of the chill that permeated my room when the rains started. The thunder and lightning had moved on. A small part of me was worried that I might oversleep, since the alarm clock was out. And even though I had my watch alarm as a back up, there was a chance that I wouldn't be able to hear it above the hypnotic din of the falling rain. But at the moment, I didn't care. I just fell willingly into the sweet abyss of sleep.

It rained most of the day, on and off, light showers and steady downpours. I liked it. Some people don't like getting wet. Some don't like rainy days. But I do. It's good for the land, good for the vegetation. All around were the scorched remains of wildfires and a sea of brown dead grass from the drought that had smothered the city for over a year. And with the sun hidden most of the day, it seemed cooler, a welcomed change from the stifling heat that oppressed us all summer.

There was a slight drizzle when I stopped off at the supermarket. Still a few cars in the parking lot. I needed to buy groceries. I had finally run out of food. I had eaten that last pack of crackers with a mixture of mustard and ketchup packets left over from previous take out orders. This morning, I ate the last of the pancakes. I had run out of maple syrup two days before, so I had to make a simple syrup--equal parts sugar and water, bring to a boil, reduce, cool, and serve. I had made a shopping list. I had learned the hard way that I needed a list. I was tired of wasting time and money buying other stuff and then forgetting what I needed to buy in the first place. Yes, indeed, I was smart enough to make a list, just not smart enough to bring the list with me. Sigh.

I thought about that shopping list that I painstakingly made. I had even left it on the coffee table, next to my keys so I would take it with me when I left the house. Except I forgot. Oh well. I looked out at the half empty parking lot and the slow, light rain. I thought about putting on my raincoat, but then decided against it. It was only a slow, light drizzle. I exited the car, locked it, and ran towards the store entrance.

Inside, I wandered about, thinking about the items that I did remember from the list. Among them was butter, to eat with crackers and tea. I had developed a craving for them this past weekend. I got the butter, but of course, they didn't have the crackers I wanted. I was looking for low sodium, but they only had regular and multi grain. I didn't like either very much. But I figured multi grain would be healthier, or at least, less saltier. I managed to grab a few other items before going up to the register to pay for them.

I was standing in the 10 items or fewer line, when I noticed the couple in front of me had 14 items. That annoyed me. Why can't these mofos just follow the rules like the rest of us? Can they not count? Of course, they were also giving the cashier a hard time. Apparently, the woman wanted to separate some of the items in different bags, because there was stuff that she wanted for herself, except the man was paying for all of it. How hard is it to pick out your own damn bag of chips from a grocery bag? The shoppers behind me were mumbling complaints, and I let out a soft sigh. I think the woman must've picked up the disgruntled atmosphere and turned to offer a small apologetic smile to us. Soon enough, the troublesome duo left and I paid for my stuff.

As I was picking up my bags, the lady behind me said, "Sir, don't forget your wallet," and handed me a brown wallet. I returned her smile and nod, more out of reflex and courtesy. She turned away, paying for her items. I held the wallet in my hand, confused, because I didn't own a wallet. There was money sticking out, two $100 bills. Before I could say anything, I was pushed out of the way by a wave of exiting shoppers--people eager to get home after a long day. I found 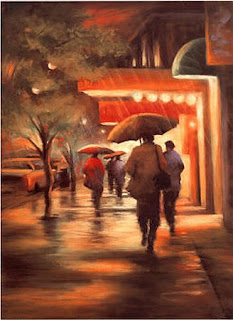 myself outside the store under the awning. I looked at the ID on the other side of the wallet. It belonged to a man, the one who had stood in front of me in the line with his 14 items.

I thought about going back inside the store to return the wallet to some manager. It would be smart thing to do. Then I thought I ought to give a quick scan outside for the owner. The rain was starting to get heavier again. It was getting darker as well. And just before I gave up, I spotted the owner at the far end of the parking lot, just closing his car trunk. After looking to make sure the road was clear, I ran towards the owner's car. He had just closed his door and started his car when I reached him. I knocked on the window and startled him. I asked him if he had his wallet. But he didn't seem to understand me. He lowered his window slightly, probably out of caution and trying to avoid the rain.

This time, when I asked him if he had his wallet, he took a few seconds to digest the question, before fumbling for his pockets. I could see the panic in his eyes, before he turned back to me and saw that I was holding out his wallet for him. I told him that he had left it at the store. He took that wallet from me, a quick eye catching the money sticking out, before he and the woman eagerly said thanks. I just nodded and hurried over to my car on the other side of the parking lot.

Soon after I reached home, the rain started to pour down heavily. My shirt was half soaked by the time I got inside. I put away the groceries, heated up a pot of tea, then took a shower. Afterwards, I sat down, with some crackers, buttered them up, and dipped them hot tea before consuming them. I suppose some toast would be good as well, but I didn't think to buy bread at the store. Besides, I'm happy with the crackers right now. Some how, they seem fitting to eat during the rainstorm chill. Far away, I can hear the echoes of approaching thunder. If it means more rain all night long, then I'm okay with that. It means I'll just sleep better.