Well, I'm back in Texas after spending some time with my brother, in Hawaii...and boy, did I have fun!!! I had so much fun that I thought about ditching my apartment in Texas and make a living in Hawaii instead :) But, I've all ready signed a new lease, and I did leave my car with a friend, so I have returned, rejuvenated and sunburned.

With my trusty camera in tow, I took fotos on my journey to document the adventure. When I was younger, I had a journal (because diaries are for chicks ;). In that journal, I wrote mostly of thoughts, events, and things that were of interest to me at the time. I think that the camera has become my new journal. It's funny, because my dad used to take lots of fotos when I was growing up. My mom despised it because everyday, he would take fotos of us, sometimes when we weren't looking our best. My father loved capturing moments--my mom hated it, especially when dad thought that mom covered in mud after chasing my siblings and I in the yard was foto worthy.

Many years after my father had died, my mother gave me his camera as a present for my graduation from junior high school. She said that she hated how my dad reveled in taking daily fotos of us doing things so mundane; but now, she realized that he was trying to capture memories, as if somehow, he was preparing us for when he would leave this world, and time would wash away his memory. I still have that camera, locked away among my most prized possessions. It's one of the very few things that I have of my father. I'm not sure if my passion for taking fotos is something I inherited from him. But I do know that I luv art, and the camera has been a great medium to capture some of the most beautiful and interesting things I've ever seen.

The journey to Hawaii was almost a whole day affair that began with a departure from Bush Intercontinental in Houston. 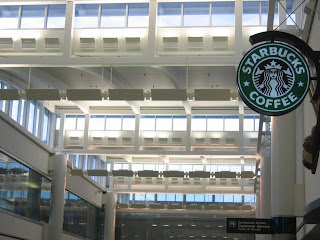 I luv the E Terminal's design; it's open, clean look makes it look airy and lets a lot of natural light inside. My flight was scheduled for departure at noon, so I had to be there by ten at least. I left my car with a friend who dropped me off at the airport. I bought some Panda Express for brunch, because I was hungry and in the mood for some Chinese--food, not Panda...although, if it was Panda, then it was so delicious ;) I had forgotten my shades in the car, so I bought a new pair of inexpensive sunglasses from a cart by my gate.

Any doubts about being at the wrong gate were resolved as I looked at the passengers waiting to board. Most wore hiking boots, flannel shirts, and lumberjack vests. Either these folks were from the Northwest or I was traveling with a group of lesbians on a their way to watch a whale migration on the Pacific coast.

My flight was about 5 hours to Seattle, Washington, where I would make a connecting flight to Honolulu, Hawaii. On the flight, they were selling headphones for dollar to see the movie, National Treasure, Book of Secrets. I had a few dollars in my carry on, but it meant reaching up in the storage compartment and undoing the fragile packing of the various items stuffed in there for the duration of the flight. The flight attendant didn't have change for the twenty in my pocket, but the lady next to me gave me a dollar. I thanked her. I was moved by her generosity; her accent and clothing hinted at a Southern origin. She introduced herself (and confirmed my guess), telling me that she was from Alabama, the Deep South.

Perhaps it was because I was in vacation mode or maybe the food--damned, panda! making me sleepy!--that I let my guard down and did not see that this dollar was not an offering of generosity. Rather, it was the cheap price paid for my attention. As soon as I was done eating the chicken sandwich, this lady began to tell her long story (complete with fotos) of her house and recent interior design changes she made. Being a Southern gentleman, I let her talk, the movie, now forgotten, the earphones, useless. I looked at the girl on the other side, fast asleep, escaping the long, drawn narrative I was now caught in, offering my occasional "wow" and "that's interesting" as a polite partner in this trap of a conversation. I cursed my upbringing for instilling in me traits like being kind to strangers and respecting my elders.

Truth be told, it was not so bad listening to this elderly lady go on and on about her house. Eventually, we came to the real reason why she wanted to talk. She was going to Seattle to meet her only child, a son who wanted to introduce her to his new fiancee. I suppose it wasn't so terrible listening to this lady express her fears and hopes. In a way, the human conversation, this connection was perhaps a tad more entertaining than the movie. I do confess though that as soon as the girl by the window woke up and started sharing her foto stories with the elderly lady, I took that as my cue to put on my cheap dark sunglasses and pretend to sleep for the remaining hour on the flight. When we landed, I politely said my farewells to the elderly lady and the young girl by the window, and we all made our exits to our different destinations, me with headphones still in the plastic, now tucked in my shirt pocket.

Sea-Tac ,the Seattle Tacoma International Airport, was much smaller than Bush Intercontinental, but it had some fascinating design elements of it's own. This was the fascinating view from the food court, where I ordered and then sat down to eat some Japanese food. I luv the curved windows and the hanging lights and plants, a beautiful blending of sleek, chic architecture fused with natural elements. 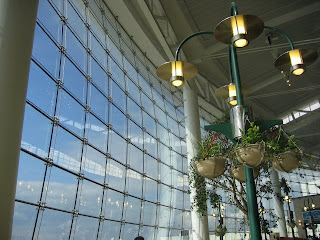 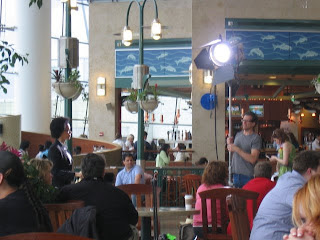 I was enjoying my Japanese lunch when a fellow asked if he could join me at the table. Looking around, I saw a few other empty tables. Then I thought, maybe the dude wanted to enjoy the view from my table, watching planes take to the skies. We started some polite conversation, about the weather, where we each were heading, and just stuff in general. He was returning home to Canada after some business down in Arizona. Then he started making comments about what he was eating, telling me that he was starving for a hot dog, and he gladly paid an exorbitant price for this delicious meal. He went on about how he hadn't had any Texas beef in a while, and how he loved eating that tender, mouth watering meat. I wasn't sure if he was propositioning me, but if he was, I knew that after that dollar for earphones fiasco, I was in no shape to negotiate . Well, he may have been truly a meat lover and my ego made me think otherwise :)

My flight left first, so I said good bye and took his outreached hand and shook it; I wished him a safe journey and proceeded to the basement to catch the train to my connecting flight. I luved the flowers growing out of the walls of the train station. If the airport was any indication, these North Westerners have truly embraced nature in their lives and made it part of their daily routines. 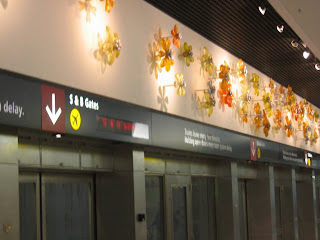 My flight from Seattle to Honolulu was another 5 and a half hours. I got a window seat this time. Guess what movie was going to be playing? That's right, National Treasure, Book of Secrets. Did I watch it? Of course not!

After stowing my carry on, I put on my shades and quickly fell asleep--probably thanks to eating that Japanese "tuna", or more likely, whale meat ;) I woke up once, to see the lady in the middle seat offer me a pillow. I thanked her, took it, and went back to sleep. When the plane started it's descent about half an hour out from Honolulu, I woke up. The lady who gave me the pillow was standing in the aisle next to (I found out later) her husband and exclaimed, "He lives!" For a second, I wasn't sure if she had mistaken me for Jesus or Dr Frankenstein's creation. Nonetheless, the applause I received from the surrounding passengers was all the incentive I needed to stand up, take a bow, and wave at my admirers ;) Not to mention it was a good time to stretch.

When the plane landed and we exited the gate, I knew that I was in Hawaii, when who would greet us, but hula dancers, dancing, smiling, and welcoming us to islands of Havai'i. This is how Honolulu International Airport welcomes visitors. 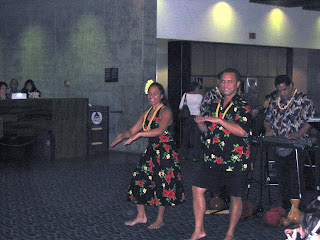 I went down to retrieve my luggage and to meet my ride. It was already about 8:30 pm in Honolulu. I waited by the passenger drop off and pick up area for about five minutes. Then I saw a big blue SUV, and the driver got out. All smiles, he was holding a card with my name on it, I went up to him and said, "Jackass! Where the hell is my flower lei?"

He replied, "Dude, if you want a lay, I'll take you to Waikiki!" We laughed and hugged. It had been almost nine years since I last saw him. He was bigger, his hair was different, but the wicked smile and mischievous twinkle in eyes were still the same. It felt really great to see my brother again. This was the beginning of a great trip! Ten minutes later, my brother and I laughed and ate at a local chain restaurant called Zippy's. It had taken a while to get here, but I had arrived, and so began a fantastic vacation.
***Posted by eroswings at 5/03/2008 03:30:00 AM