View from the top

Growing up, I luved to explore the outdoors. So did my brother. We met some friends and then drove out to Diamond Head, possibly the most famous volcanic crater in the world. It's the the mountain from the tv series Lost. It only costs $5.00 per car, or $1.00 per person for walkers, to enter the tunnel that led into the crater.

We had arrived after 8 a.m. My brother said, it's early enough so it wouldn't be so crowded, and it would be cool as we hike up the 760 ft or so volcanic cone. The hike would be over a 1/2 mile long, comprised of trails and steps and tunnels. It was an estimated hour and a half to two hours to hike to the top. Even though we started early, I was surprised at the number of tourists (and locals) all ready out there. I saw a number of European and Japanese tourists on the hiking trail.

My brother and some of our group decided to race up the trail. I decided to take my time and take some pictures along the way. I took this one at about a quarter of the way up the trail. 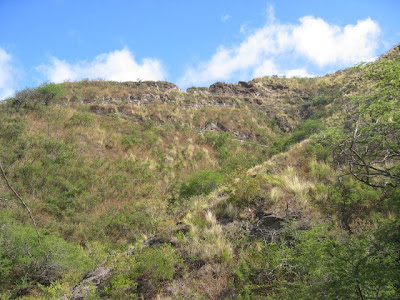 You can see the rails along the trail. About 2/3 of the way up, you come across concrete stairs. A lot of people were huffing and puffing as they struggled up this "moderate" hike. Some people returning had smiles on their faces and kept saying "The view is so worth it!" A few of them lied and said "You're halfway there!" This was much comfort to this elderly couple next to me, the husband getting a little short of breath, the wife, blissfully enjoying the scene, not letting the old man ruin her hike. I inquired if they were okay and if they needed any help, but the elderly couple smiled, politely refused my help, saying that they were doing fine. This elderly couple would follow me, I would find out later, as I made frequent stops to take fotos.

(Much later, as we descended Diamond Head, my brother kept laughing as I repeated the same lies to other hikers, "You're halfway there!". It wasn't really lie; it was more of a motivational technique to encourage hikers to finish what they started.)

When I reached the concrete stairs, I stopped at a rest spot. Every now and then, there were benches and look out points. If you look at lower right corner, you can make out the trail below me. 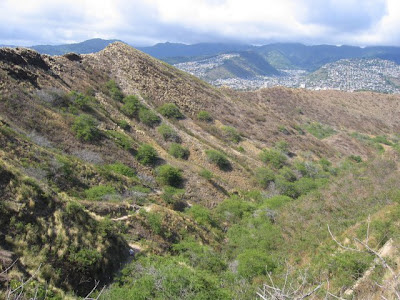 Now, if you look on the left, you can see a person standing on the trail at the spot that I took the first picture!

Through two tunnels and a flight of 99 steps (I didn't count--it was in the brochure), I made it to the top, almost a half hour later than the rest of my group. Interestingly enough, there were a few people training for the Iron Man competition who actually ran the whole trail and steps. These idiots athletes were gasping for air as they raced up and down the dirt trail and steps.

When I reached the top, I found myself in a bunker and took this foto. 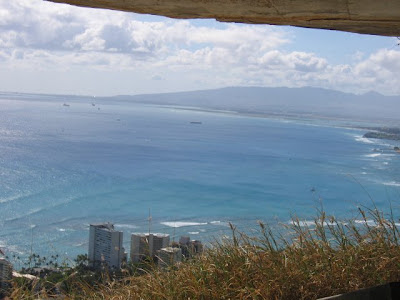 Built in the early 1900s, this bunker was designed as an outpost to spot incoming ships, and later, airplanes. The radar made the bunker obsolete, but nonetheless, the military still maintains Diamond Head and keeps it open for tourists and locals. We spent quite some time mingling with other hikers, admiring the view from the top. It was so worth the hike. Bonus, the elderly couple eventually made it to the top, and we cheered and clapped at their arrival!

On an interesting side note, there are no diamonds in Diamond Head, much to my disappointment. The natives call Diamond Head Le'ahi, which means the brow of the tuna (that top dorsal fin so prominent on tuna). The name Diamond Head was the result of greedy adventurous British imperialist conquerors sailors who mistook calcite crystals in the crater for diamonds.

While there are no diamonds in Diamond Head, the view is just as priceless.
From inside the almost perfect bowl shaped crater, 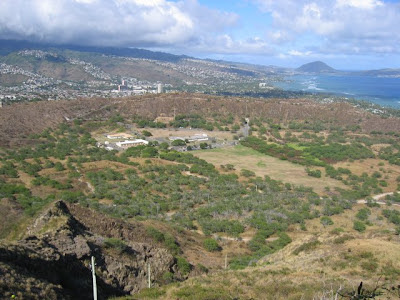 You can almost see forever... 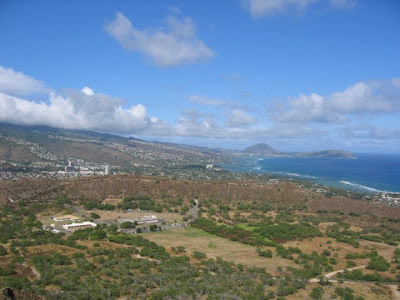 And to one side, you can see all of Waikiki, shining city greeting the sea. 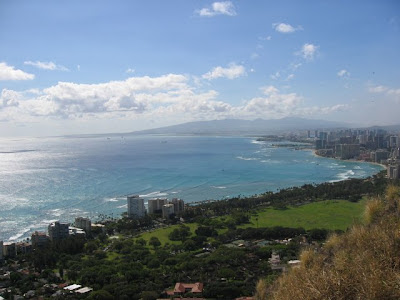 And if you look closely at the end of that wide stretch of green grass, you'll see the red seats of the Waikiki Shell. 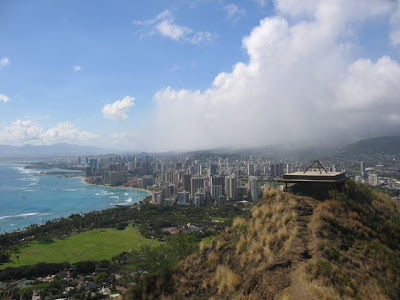 And on the other side, you can see the lighthouse. 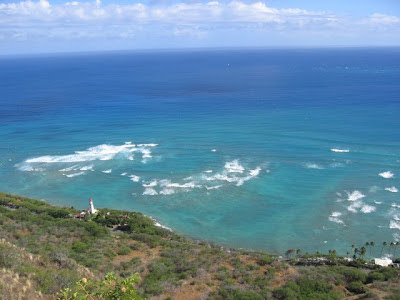 Looking at the lighthouse, I couldn't help but notice these tiny specks floating in the water. What were they? I zoomed in with my camera, and it only took a few seconds before the exciting realization dawned on me. 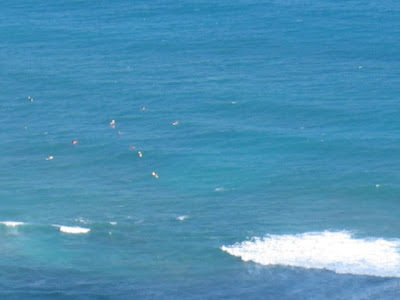 Before I could verbalize my discovery, my brother came up and said, "Notice the waves?" Of course! How could I not?, "That's where we are headed next!" And so we did. We spent the rest of the day enjoying the sport of kings, surfing the waves of the Pacific as the ancient Polynesians did thousands of years ago.

Hours later, during a lull between waves, I turned towards the shore and marveled at the majesty of Diamond Head, a stairway to the heavens. I could not think of a better way to spend the rest of the day. Just another day in paradise.
***Posted by eroswings at 5/07/2008 11:28:00 PM